Since the origin of computing, innovation has been happening in broadly two areas – 1) Technology – silicon, circuits, storage and so forth, aptly captured by “Moore’s law”, and 2) software – operating system, application, virtualization and the like. While these two areas continue to evolve, although at a slower pace than earlier, the last decade brought in another dimension to the innovation phenomenon –acquisition and consumption. Until the first decade of the 21st century, computing infrastructure was all captive. Companies built sprawling datacenters to house their IT infrastructure, managed by their staff – highly skilled to run operations and keep the “lights on”, if you will. As technology evolved, Information Technology or “IT”, as it was popularly called by then, had to be refreshed every 5 to 7 years and staff reskilled, and as a result became a significant “capital item” in company’s budgets. That was true for even for the applications that ran business workloads or support workloads such as HR and resource planning. Companies had to dedicate a significant amount of their resources to manage and run their “IT”. That created a value proposition for startups and established players in the technology industry to innovate and free up corporations from their captive IT which would allow them focus on their core businesses.

The industry called it the “as a service” phenomenon or *aaS in short. Infrastructure as a Service (IaaS), Software as a Service (SaaS), and so on. New companies originated with this model and later became Silicon-valley stars, with Salesforce.com becoming a shining example of this phenomenon. Amazon, which until then had made its mark as a great online store for books, soon came up with an offering where companies could rent out storage space from Amazon S3 cloud storage and compute resources from Amazon EC2. That, which eventually came to be known generically as “Infrastructure as a Service” and several other aaS offerings from Google, Microsoft and countless other companies have created a whole new IT design, called generically as the “cloud” or the “hyperscalers” (if you are the jargon liking ones). This new dimension of where IT is situated (core, edge cloud), how it is managed, and how it is paid for has created large set of possibilities for the IT design of today’s enterprises. The IT is truly “Hybrid” – not one model is going to dominate over the others and several of them are going to coexist inside of the same enterprise for the foreseeable future. This HybridIT has become the new pivot of HPE’s go forward strategy and HPE NonStop will participate in it whole heartedly.

HPE NonStop in the new style of IT

HPE NonStop, having its origin in the 70s – the foundational years of IT, has lived through all evolutions that took place in computing technology. NonStop has embraced and leveraged each of these evolutions, while retaining its core architectural elements and its value proposition as a highly available and scalable platform in the industry. Today’s NonStop systems run on modern hardware, offer industry standard operating environment for applications, support modern programming languages such as C/C++, Python along with Eclipse based development environment and enables customers to adopt modern practices such as CI/CD which are known to aid innovation, quality and agility. Throughout this journey, NonStop has been very consistent in its core value proposition of offering mission-critical availability to workloads. Today, NonStop continues to be rated by IDC1 at AL4, the highest availability level that can be offered by any computing platform on the planet.

Offering NonStop systems to the HybridIT world began with the introduction of HPE Virtualized NonStop (vNS) on VMware, back in 2018. A platform like NonStop that houses the most business-critical workloads and handles some of the most sensitive data, is the right candidate for customers to deploy their most important workloads on. It can be deployed as a cluster of VMs on industry standard servers and use the same storage pools as being made available in a private cloud for general workloads. vNS is a “software only” offering which means it gets delivered to you in a bunch of image files and you get to decide where you run this software, just as you may be doing  with your other software products in the cloud. Again, sticking to its core value proposition, you get the same availability and scalability characteristics with vNS as you get with NonStop converged systems (NonStop X). There is nothing called “almost NonStop” 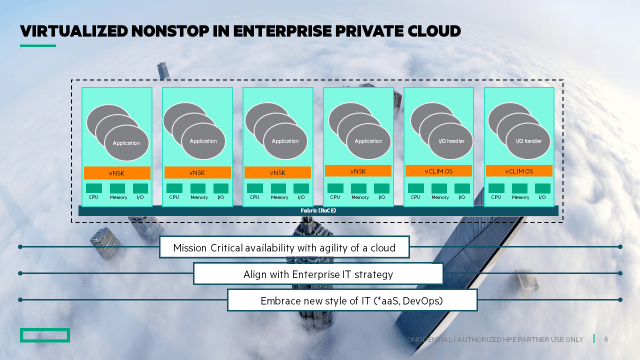 vNS is an orthogonal shift from NonStop’s traditional offering of being a fully integrated hardware and software solution. The key value proposition however is the ability to make cloud workloads highly available and out of the box. Together with another offering from HPE – NonStop SQL cloud edition, vNS can be a powerful backbone of your private cloud for mission-critical computing and data management needs. vNS also makes it possible for NonStop to seamlessly adapt itself into HPE’s vision of IT as being an enabling infrastructure for businesses that can be consumed in an as a service model. And while this is not a cost play, cost savings do come from two aspects – 1) Hardware acquisition cost, and 2) Operational cost savings due to platform standardization.

What have we heard from customers so far?

HPE is seeing a steady growth in customer adoption of vNS. Several customers are already into production with it, and more are moving into production in the near term. We had the pleasure of listening to some of them during the 2020 Technical Boot Camp (TBC). As a product manager, I have been carefully listening to the feedback from each of our customers, as they go through the motions of acquiring, installing, deploying, running and managing this platform. It has been greatly enriching to listen to customers on both the good and the not so good part of their journey. It gives us confidence about the path we have set ourselves in, uncovers our blind spots, and enables us to calibrate our strategy and roadmap to see this platform evolve itself into the platform of choice when customers think about making their workloads mission-critical.

What have we learnt and how can we apply it?

There are many that we have learnt. Here are the two most common ones.

When you setup your environment for vNS

As described earlier, unlike converged NonStop systems, vNS is delivered as a bunch of software images. The hardware to run it on needs to be prepared to meet some of its unique requirements such as a dedicated >= 25 GbE fabric network and fabric NICs of specific models, port groups with SRIOV and Passthrough access to NICs and so forth. These requirements are documented in the “Hardware architecture guide for HPE Virtualized NonStop on VMware” and in the first half of the “HPE Virtualized NonStop Deployment and Configuration Guide for VMware” and are must reads for the personnel setting up the hardware and VMware environment in preparation for vNS deployment. You can find both of these in HPE NonStop L-series manual collection available at www.hpe.com/info/nonstop-ldocs. While they provide a good set of background information, they are not a substitute for close coordination between the cloud team preparing the platform and the NonStop Technical Services personnel who do system deployment. They can give you the right advice, considering your specific environment and also answer any questions you may have.

Converged NonStop systems sometimes live in islands of their own, managed by people specially skilled and trained to handle these systems. In a private cloud however, NonStop is a “tenant”, co-habiting amongst others in the cloud. Well, this is what cloud is after all, isn’t it? While that’s true, it’s also important that the managers and administrators of the cloud are well educated about NonStop and should be prepared to take care of its needs. A proper interworking between cloud administrators and NonStop administrators is of paramount importance for the seamless operation of your most critical workload that’s running on NonStop. Some customers have deployed NonStop over a separate VMware cluster, with access security restricted to administrators having familiarity with NonStop and who reach out to their NonStop counterparts whenever there is an issue or need to perform operations that may impact the system. That’s another best practice I’d recommend.

What else you could do if you’re considering vNS

Good planning always helps, especially because you’re looking to move into the cloud that workload which may be processing your payment transaction, running your manufacturing shop, or managing your patient care records. A good option to consider would be to buy a small vNS system. Two 2-socket rack mount servers and a pair of switches is all you need to build your vNS system. In fact, you can deploy two NonStop systems (2 CPU and 2 each of IP and storage CLIMs) on this same hardware. This will give you, also more importantly your IT teams, a first-hand experience of building, deploying, commissioning and running a NonStop system. It helps you simulate scenarios – how to repair/patch the underlying platform with least disruption to your workload, simulate hardware or software failures, consider creating multiple smaller NonStop systems instead of larger systems to help narrowing down the fault-zone or narrow the impact when you need to take an outage to upgrade the RVU and so on. They will help you prepare a robust playbook to be adopted by your support teams. To borrow the phrase from the “Seven Habits” book, this is exactly what “sharpening the saw” is. You plan and prepare well before you actually execute something whose success is critically important to your business and this is a good way to go about it.

Do you need help to build the hardware Bill of Materials (BoM)?

Sure, by all means. HPE can give you a reference hardware bill of materials based on HPE parts. This may give you an excellent starting point which you and your hardware specialists can then use to arrive at the final hardware spec to host your NonStop system. Reach out to your HPE NonStop specialist and she or he will be happy to help.

How is HPE adapting these learnings?

HPE is doing several things to enhance the vNS offering with these learnings. The focus area for vNS is to enhance customer experience while enabling their cloud and NonStop support teams to run the mission-critical workload on NonStop in harmony with standard operating procedures of the cloud environment. The future of NonStop and the capabilities that HPE builds over it depends a great deal on the ability of the platform to work seamlessly in modern cloud environments. It’s a clear focus area for vNS in the near term.

What is next for NonStop in Hybrid IT?

With Virtualized NonStop, you now have the ability deploy mission-critical workload in several different ways. That’s an important aspect of Hybrid IT model, but it doesn’t end there for good reasons. HPE’s direction is to offer everything as a service. HPE GreenLake is the platform under which HPE products are being offered in an aaS model today and NonStop is busy working with GreenLake team to deliver new ways to purchase the platform.