Just a few months ago, N2TUG was starting to plan for our early summer meeting. We had barely started the task when events outside our control made our usual in-person, Vendor-sponsored meeting unlikely at best. We knew we wouldn’t be able to hold it in summer, and started considering the Fall. In hindsight, even that was a bit too optimistic.

Then in mid-May, the Connect staff reached out to us and said they were putting together an alternative to in-person meetings. And so, the ‘VIRTU-NUG’ concept was born.

Hopefully, you had an opportunity to join in at least part of the 4 2-hour sessions that made up the event. The sessions included not only the usual Sponsor-led presentations but a handful of end-user presentations describing how HPE and Partner products were used in ‘the real world’. The speakers varied in their delivery, too. Some simply streamed a simple PowerPoint presentation and spoke as they would have in person with no video. Others started their presentation with some personal introductions, shown on our PC screens from their home offices. One even took his camera out into a sunny, British pasture to give his talk! And in the breaks between sessions, the staff streamed some old ‘First Friday’ videos and some ‘Mr. NonStop’ commercials, so we all could get a good laugh!

On each of the 4 days, the 2 hours of presentations were followed with a traditional Zoom video conference, labeled a ‘Virtual Happy Hour’ (VHH). The first week, there were separate conferences hosted by each regional group, such as N2TUG. As attendance was not high, subsequent weeks consolidated into a single conference. 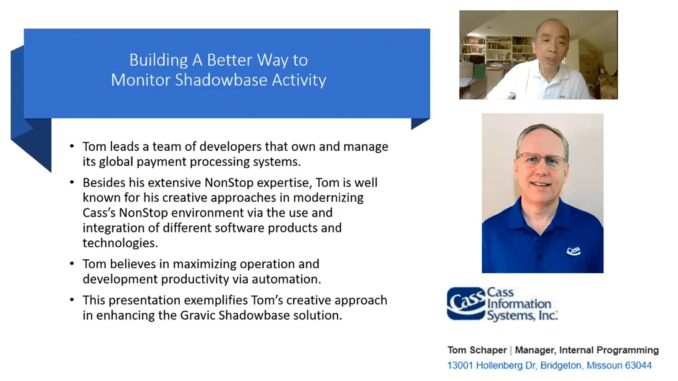 On the last day, most of the attendees of that final ‘VHH’ were either Chapter Leaders or sponsors, with only one or 2 end users. Since it was so small, Peter Schwarcz of NYTUG suggested we go ‘around the table’ (so to speak) and ask opinions of how the Virtual Experience compared to an in-person event.

To summarize what I heard, the consensus was ‘definitely better than no meeting’. Of course, presenters need to learn and do a few things differently, perhaps leaving more time for Q&A. Everyone seemed to agree that virtual would never replace an in-person event from a networking and socializing standpoint, but that was expected. Some suggested that sessions be set aside as sort of a ‘birds of a feather’ session. For a first-time event of this sort, it was felt that Connect did a marvelous job.

I want to add my own thanks for the tremendous effort that the Connect staff made to bring this to fruition in about a month. Even without planning a venue with Food and Beverage, putting this together was a huge effort, and it went off really smoothly. Big kudos to Kelly Luna!

It’s my understanding that the NonStop Technical Boot Camp, scheduled for San Francisco in mid-November is still being planned as of this writing, but given the nature of the Pandemic that is influencing all of our plans, it could easily change. I’d suggest that you keep watching your email inbox for updates.

I really enjoy being involved with the NonStop Community in Connect, and am constantly amazed at your resilience. Here’s wishing each of you continues to persevere as we deal with this disease. Looking forward to seeing you all sometime soon!