Wow, after two years, six months, and six days, the BITUG regional user group for the HPE NonStop community in UK and Ireland finally got to meet face-to-face again! We have all appreciated that virtual collaboration tools have enabled communities to continue the work of training, updates, and advocacy but there was a sense of fun, interaction, and comradeship which only face-to-face events can generate.

BITUG returned to one of their favourite venues, Trinity House London, for the BIG SIG conference held 9th June 2022.

Where better to hold a conference since this is a historic place and an institution having been formed in 1514. Granted under King Henry VIII to the charitable guild of mariners (later to be renamed the Corporation of Trinity House) it allowed regulation for the navigation of the River Thames in London. King Henry VIII’s daughter Queen Elizabeth I extended the Corporation’s powers to include “buoyage and beaconage” covering the length of the English coastline which effectively would become coastal Lighthouses. As Queen Elizabeth II celebrates 70 years as the monarch in June 2022 (Platinum Jubilee) there were beacons lit the length and breadth of the United Kingdom. It is reassuring that organisations such as Trinity House continue to provide an outstanding service to assist the safety of mariners and where better for the NonStop community to hold an event discussing the capabilities of a mission-critical server platform?

Trinity House is in a lovely location just behind the Tower of London and with views towards the River Thames and Tower Bridge. The weather was “picture-postcard” perfect lifting everybody’s spirits. 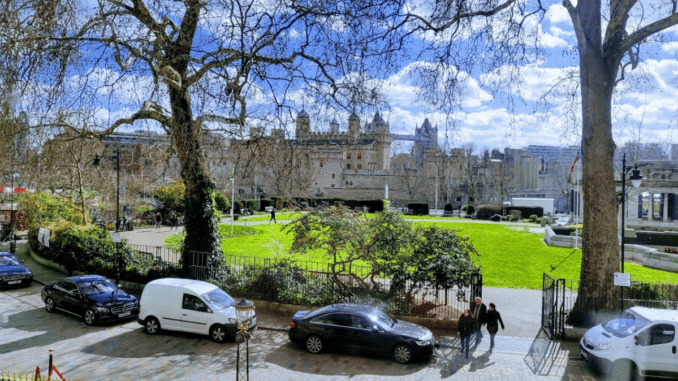 Registrations were just under 100 showing a real desire by customers, vendors, and HPE to socialise again, and certainly conversations I had with customers before the event was that they were so glad it was not a “virtual” conference again this year.

There were a few hiccups on the day with the odd vendor exhibition shipment not arriving on time (including the badge Lanyards) but generally, everything went smoothly after 2.5 years of virtual conferences. We missed Neil Barnes, a stalwart of our voluntary BITUG committee since he retired at the end of 2020. However, this gives young blood the opportunity to make the NonStop community their own and influence the future direction of conference events. BITUG was founded around creating a NonStop community for UK and Ireland but it is definitely open to anybody who would like to join and travel to the UK for conferences. We are always looking for new volunteers for the BITUG committee (who run the events); especially customers since the events are held predominantly for you. As an unsolicited plug, please email chair@bitug.com if you would like to discuss joining the BITUG committee.

For me personally, it was good to get back behind the podium and present to a live audience once again. Presenting an update on the whole of HPE’s NonStop Platform, Software, and Database in 50 minutes was always going to be a challenge but hopefully, the content was valuable and I must thank the HPE NonStop Product Management team for their input.

I think there were a few key takeaway points covered with the community:

From the L21.06.01 RVU there are a number of enhancements for the NonStop Platform to note:

BackBox VTCR4 build on Windows 2019 server is available from HPE with up to 128TB internal raw storage rather than external storage shelves, an optional QoreStor license supporting dedup, encryption, and replication with configurable storage tiering (including Cloud), and a choice of physical server or virtualized deployment.

From a Manageability standpoint then tools to tokenise MQ log events, integrate NonStop events into Enterprise management via SNMPv3, have a highly parallel workflow Batch scheduler, and also provide insight into Base24 ATM and POS transactions have also been added.

For Applications and Development the addition of NSGit simplifies the control, merging, commitment and deployment of code changes integrating to standard Git which does not understand NonStop files or objects in native form, essential for DevOps integration and source code control. Lightwave Server and Lightwave Client assists integrating NonStop applications with REST either to expose as a service or access external REST-based services. API Gateway for integration of JSON over HTTPS will be a key tool for supporting standard interfaces and protocols to invoke NonStop applications. Future enhancements include integration with Kafka queues, MFA for administration and usage and allowing “tokens” in header messages such that authorisation and authentication can take place.

For the Database layer then SQL/MX 3.8 builds on the existing database services, multi-tenant, simple single system image management, and one license charge with a compatibility layer by adding native BLOBs and CLOBS. The PL/MX compatibility layer for PL/SQL extensions to SQL also adds BLOBs and CLOBs within the data types. SQLExpress has some excellent security features for DBAs to manage NonStop SQL including role-based access control, multi-factor authentication, security event integration into SIEMs, and auditing of change.

Finally in the future then development has engaged on the project for Kernel Level Threading (KLT) within the NonStop Kernel. This will probably have a similar impact to opening up the NonStop OS as OSS did in the 90s adding not only additional POSIX 1003.1 compliance and easier application portability but also being the foundation for future parallel middleware from NonStop Division.

With TBC coming up 8-10 November 2022 at Hyatt San Francisco Airport https://www.nonstoptbc.com/ and the European BITUG in Edinburgh May 15-17 2023 https://www.bitug.com/ebitug-2023 we can expect to hear more about developments for the NonStop OS environment so I encourage customers and vendors alike to put a place marker in their diaries!