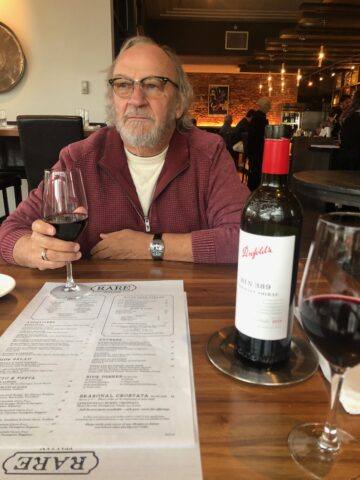 Do you remember the early 1980s? Or perhaps, just like our young server last night, you were not even born yet back then? So last night as we entered the restaurant we noticed a priest sitting at a table with a young family, parents, and a couple of kids ages about 5. Richard Buckle ordered a bottle of Penfolds 389, as he does whenever we are at the Fort Collins, CO, Rare restaurant on Sunday – no it is not a religious ceremony, the priest’s presence totally accidental, it’s just that on Sundays they have wines half off!

As any Australian would do given the circumstances, Richard proceeded to tell the server about a time in the early 1980s when he visited the winery that brought us Penfolds and she looked at him and told us it was way before she was even born! OK, what does this have to do with the virtual NonStop?

I am getting there, but having been associated with Richard all those years I too am getting to the topic in a roundabout way… So, back in the 1970s and early 1980s if you were developing software for the NonStop computer (called Tandem back then) you needed a dedicated machine to test it! In the Tandem offices in Cupertino, there were computer rooms dedicated to performing debugging and QA of the software – as a developer or as a tester you were signing up for a time window when this expensive hardware was for your personal use!

You turn switches, you sat at a console, frequently with the ashtray next to you as it was always an intense experience and you needed that cigarette. Yeah, the air was bluish heavy with secondhand smoke – up till about 1985 or so when smoking was allowed only in dedicated smoking rooms. But I digress.

The point is that every developer and tester whether working for Tandem or for a small vendor developing solutions for Tandem or for Tandem’s customers who needed their specific environment augmented or tested, needed time on a dedicated machine. That is expensive! That not only takes money to get the hardware and software, but it also takes money to get a space, raise the floors and run cables! It is really very expensive and time-consuming! I know firsthand as often it was part of my development budget.

In comes the idea of a virtual NonStop, deployed on an x86 server right there, on your desktop! That was a serious game changer! No wonder many of us became seriously excited! Remember that time when you first saw demonstrations being provided on a tabletop configuration at a NonStop Technical Boot Camp event?

One more reason that introducing virtual NonStop was brilliant was the competitive landscape disruption of first Compaq and then HP acquiring Tandem. With each acquisition, it seemed as though these new “partners” didn’t quite know what to do with Tandem or how best to position it in the marketplace. To some industry analysts, as Tandem never competed in the personal computer space, its presence within a PC maker was totally acceptable.

I recall stories of Tandem support people on-site at DELL telling me about Tandem “chevrons” albeit the blue ones being affixed to the NonStop machines from Compaq or HP so that the logo of a competitor was never on display in DELL’s computer room floor! With the introduction of the virtual NonStop DELL can now use this virtualized NonStop deployed on its machines! So can IBM, so can Oracle so can anyone!

Whether your need happens to be for a virtual NonStop to run within your own x86 server farm or simply as a desktop solution for your own development teams, the upside is recognizable. That old idea that echoed around the corridors of Tandem Computers that it was the NonStop software that was the “special sauce” has been proven! The transformation of NonStop to where it is now a software solution has been completed and with that, NonStop users can choose between traditional NonStop and the new server-farm / cloud-ready NonStop of today.

My biggest issue with all of this is that so few people even know about the availability of virtual NonStop! Like many of you, I probably tend to socialize with people either involved or at least familiar with the computer industry. Whenever we get together for a glass of wine we exchange work-related thoughts, ideas, and stories. Unless the folks we talk to have a Tandem/NonStop association bringing up virtual NonStop meets with the same look our server last night gave us when the 1980s tour of the wineries was mentioned.

Well, we do not give up and educate anyone who lets us – sometimes even perfect strangers at a bar in a hotel – OK, that would be Richard, I am not starting these conversations. I wonder if more of us took every opportunity to spread the word, wouldn’t the world benefit from the now virtual NonStop?