As the support timeline winds down for NonStop Itanium platforms, more and more customers are looking forward to their next step in their NonStop evolution. The NonStop X platform running L-series is the new home where customers are moving. For some customers there is a serious issue in moving to NonStop X. They still heavily use SNA, SNAX and/or X.25 to communicate with other companies. For some banking customers this was a particular roadblock that seemed to require rework of their application and a change in how transaction information and messages will be sent to their partners. Because HPE did not port their own SNAX and X.25 products from Itanium onto the NonStop X platform, some customers felt stuck and overwhelmed by what it might involve to migrate.

In the fall of 2018, HPE began to look at ways to solve this problem for customers. A Request for Proposal process was run to look for a way to solve the issue and bring a solution to the NonStop X platform.

HPE considered hiring a partner to take over their product source code and migrate it to NonStop X. After deep analysis HPE concluded that the build instructions for these products were too cumbersome to move out of the NonStop build environment and would be pretty difficult for an outside partner to take on without a great deal of support from the NonStop Engineering team and that work to verify the products on NonStop X might take another year to complete in order to have something ready for customers. HPE also investigated products already on the market who had responded to the RfP.

After much deliberation and discussion behind the scenes, the team at HPE was quite interested in two products already in the market:

uLinga Enterprise Extender (EE) provides SNA support for HPE Integrity NonStop X, HPE Virtualized NonStop system and NonStop i systems. It enables seamless migration from SNA to TCP/IP and provides a level of fault tolerance across the links where available.

HPE NonStop users who deploy EE are able to eliminate SNA from a critical part of the network, even from the last wire “tails” that connect to traditional routers. While this often involves removing the very last of any physical SNA network presence within the data center it simultaneously moves the environment to a software solution and does not require changes to the application using it. Unlike DLSw solutions, when deploying EE, IP connections are terminated within each server that supports the EE protocol (HPR/IP).

For those responsible for network monitoring, standard IP monitoring tools can be used for visibility of the application, end-to-end, and although the applications themselves continue to remain as SNA applications, they are unlikely to require any change to begin using uLinga.

The second product that HPE investigated was uLinga for X25. Older technologies like X.25 represent an increasing obstacle, significantly restricting infrastructure flexibility and increasing complexity and administrative overhead. uLinga for X25, helps customers to quickly, efficiently, and reliably migrate from X.25 to XOT (X.25 over TCP/IP) on HPE NonStop systems. The beauty of this migration again is that it is does not require the need to change mission-critical applications or the client interface. Moving to TCP/IP increases flexibility while ensuring application integrity and cost reduction. uLinga for X25 provides this capability in a smooth way for customers.

Both products were developed by Infrasoft Pty Ltd in Sydney and Infrasoft had an exclusive distribution reseller contract with comforte AG so HPE began negotiating with comforte to bring the products onto the NonStop books for resell by NonStop sales teams.

By March of 2019, a deal was reached and HPE announced in late April that these products would be available to customers through HPE. The message was: 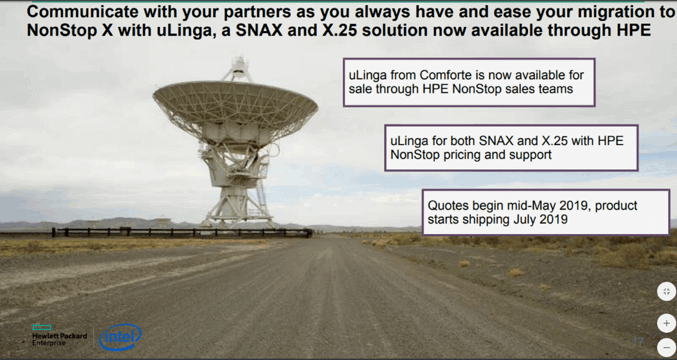 Communicate with your partners as you always have and ease your migration to NonStop X (and virtual NonStop) with uLinga, a SNAX and X.25 solution now available through HPE:

If you have a requirement to continue to run SNAX and X.25 on NonStop X or Virtualized NonStop systems, please contact your HPE NonStop sales representative. Comforte continues to offer both products on the HPE NonStop i product lines as well.

For all other enquiries relating to uLinga on other HPE NonStop platforms, please contact comforte directly as usual at ‘Contact Us’.