Ernest “Ernie” Guerrera, founder of NuWave Technologies and treasured long-time member of the HPE NonStop community, passed away recently and left many friends and loved ones behind. He touched many lives with his kindness, his words of wisdom, and his sense of humor. In the NonStop industry, as elsewhere, Ernie was admired, well-respected, and is remembered fondly.

Although his death came as a shock to many, Ernie lived a very full, rich life. He worked just about every job there is, traveled all around the world, met countless people (probably all of whom he made laugh or at least smile), and was never not having fun, no matter what he was doing.

Ernie was a true inspiration: he was always energizing the NuWave team with his passion and excitement, brainstorming new ideas, and leading with a magnetic sense of optimism, even in difficult times.

He was most often seen regaling people with his funny stories, warm smile, and quick wit. He was very well known in both his professional and personal life, acquiring countless friends throughout his lifetime.

Ernie loved his family and friends very much, but he also thoroughly enjoyed meeting new people and engaging in spirited conversation. One of his favorite things was gathering around a table to share a meal–and several drinks–with good company. He also liked making his own wine, attending football games, riding his motorcycle, and deep sea fishing.

Ernie was Italian-born but spent his formative years in the US and truly embodied the American dream. He was a jack of all trades, holding many different jobs in various industries over his lifetime, which often overlapped, as he had little need or time for sleep. As an entrepreneur by nature, he started a number of businesses, including Flicks, a community video store; a fish market; an IT consulting firm; and of course, NuWave, which his family carries on today. Although most of his startups weren’t around long-term, Ernie never gave up or got down on himself. He never had any regrets about giving it a shot.

While he will be dearly missed, Ernie’s memory is carried on by all who knew him and anyone who embodies his jovial attitude and zest for life. The mark that he made on NuWave and the HPE NonStop community is a lasting one, and his entrepreneurial spirit and joyful approach to work will be continued for many years to come. 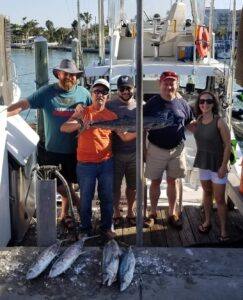 Tributes to Ernie from His Cherished Colleagues

“When I started work for Tandem in 1983, my first customer assignment was Data Architects Inc (DAI). On my first visit to DAI I met Ernie who spent many hours explaining their products, markets and introducing me to everyone. It was probably a week later when Ernie introduced me to “the big bosses” at DAI. He said, “this is Harry from Tandem, he’s a good guy.” Our friendship began that day. Not because he said nice things about me, no – it’s because he, Ernie, was a generous soul and a very good friend for all these years. Ernie Guerrera was truly a great guy and I miss him already.”

“I met Ernie in the 90’s, joined his fledgling company NuWave early on, and remain there today. When you stay with one company that long, there’s a good reason, and for me a big reason was Ernie. NuWave is a family business, and Ernie always made you feel like a part of the family. Always the optimist, always ready with a joke or story, and always looking out for you as both a boss and a friend. He will be missed.”

“I really enjoyed being with Ernie. Everyone, and I mean Everyone always waited to hear what Ernie thought. He always had the last word, and earned it from his many years of experience.”

“I’ve known Ernie for about 15 years or so. We met at ITUG, and I purchased his SOAP product during my tenure at Chase. The NuWave product was the best in that space and Ernie and his team did a great job designing it. Over the years, Ernie and I became good friends and spent some time having dinners and enjoying Florida. He was frequently here in Tampa at SunTUG and always attended and sponsored the golf tournament, although his golf game was less than stellar. One fond memory I have is that I didn’t think I liked port wine, but Ernie insisted I try a tawny port during a dinner at Mitchell’s Seafood House. I’ve been hooked on tawny port ever since. Ernie had a big heart and had a kind word to say about everyone. He was well regarded by his peers in the HPE NonStop community. Our condolences to his family. He will be missed by all.”

“Ernie was one of a kind. Funny, smart and full of life. I first worked with Ernie almost 30 years ago and still remember him as a kind, caring, smart, ambitious and oh yes, of course a funny and witty man. He could light up a room with his presence and was always ever so compassionate and respectful. When he introduced me to Gabrielle and her company NuWave, I could see the apple didn’t fall away from the tree. Ernie’s legacy will continue on through his wonderful family and the lifetime relationships he built. Ernie will be truly missed and I will pray that his soul rests in eternal peace.”

“Ernie was so exceptionally kind to me when I was looking for work. He brought me to the NuWave office, and he introduced me all around the office. We spent time looking for an opportunity to work together. We found a few projects. They did not lead to a real job opportunity but we thoroughly enjoyed each other‘s company and conversation. Ernie‘s exceptional welcome kept my mind busy during that period and his recommendation was very helpful to me. And I will always remember his kindness, his generosity and his drive to help others. May he rest in peace.”

“He was always so friendly and helpful to me, and I enjoyed every single time we were together. He was very admired and greatly loved. He was a really nice man and I will always have fond memories of him.”

“I remember how positive and friendly he was towards everyone. I know it’s only part of his legacy, but the business he created stands as a testament to his knowledge, creativity, leadership and salesmanship.”

“I always enjoyed seeing Ernie at conferences and talking Patriots and Red Sox with him in addition to NonStop. One year I was lucky enough to be on his team for a NonStop trivia competition at a VNUG conference. We won thanks to Ernie who really knew NonStop! I’ve always admired how Ernie started his own successful company but that admiration grew when he took on the challenges of starting a new career in the field of alternative energy just when most people are thinking of retiring. I was very saddened to learn of his passing. He will be missed!”

“I had the pleasure of knowing Ernie for 20+ years. He was always gracious and hospitable. We shared a passion for motorcycles and loud pipes. So, my hope is that Ernie is enjoying a great ride with the wind in his hair on two wheels and only having to put his feet down when he wants to. Remember to keep the shiny side up.”

“I first met Ernie at an ITUG Summit sometime in the late 90’s in San Jose. I did not know him as well as a lot of the colleagues and clients that he dealt with over the years, but I remember striking up a conversation with him as I was fairly new to the Tandem world and he was very genuine and funny. He welcomed me to the business.

There are some people you just connect with, and Ernie had a great personality and was really easy to talk to. I used to seek him out to say hello, and for the 7 or 8 years following that, we used to all gather for the ITUG summits and always had great conversations with him.

Unbeknownst to me, years later I ran into him in a coffee shop in Easton, MA–only to find out he lived several miles away from me! Crazy small world!

It was cool watching him bring Gabrielle into the business, grooming her to carry the torch and learn the business. I had always found him to be not just a cool dad, but a cool person.

I am sure he was very proud to have his daughter carry on his legacy.”

“Ernie was a long-time friend and a good man. His smile made the “meetings” after conference hours particularly enjoyable. There will always be a virtual seat at the table for him whenever our community meets.”

“I remember Ernie being a wine enthusiast. Every time we ran into each other at events, wine was a topic that invariably would come up. So, I would like to pay my tribute to Ernie with a wine metaphor, which I know he would appreciate.

Ernie possessed depth and clarity when working with clients and partners.

He could be subtle and complex at the same time in conversations with friends.

He always had a bold finish with his marvelous sense of humor.

No doubt, Ernie was a wonderful 90+ point vintage.

Please join me and raise a glass to celebrate the wonderful friendship and memory that Ernie gave us. May he rest in peace.”

Ernie’s obituary can be found on the Farley Funeral Home website. Charitable donations in Ernie’s memory may be made to Ocean Conservancy to preserve the ocean that he enjoyed so much, or to Future Leaders in Technology Scholarship Fund.