SMCC, as a pioneer in Japan for Visa, has been in the payment service business for over 50 years and is one of Japan’s leading financial services companies with an annual card transaction volume of over $ 180 billion. SMCC has been using the HPE NonStop server for several generations since 1983 for authorization operations that require the highest availability, reliability, and real-time processing performance.

SMCC has been considering how to evolve the credit card payment system, which plays a part in the “Social infrastructure system”. The first approach was to modernize a “Gateway system” to connect a business terminal that responds to customer inquiries such as lost cards, to an authorization system/payment host system. SMCC has modernized the credit card payment system by replacing existing gateway systems operating on commercial UNIX systems with industry-standard technologies such as HPE Virtualized NonStop (vNS), HPE NonStop Application Server for Java (NSASJ), and JavaScript Object Notation (JSON).

For SMCC, the aim of adopting HPE vNS in the production environment was to evaluate the “Practicality of vNS” and to confirm “Effectiveness of server virtualization technology” in order to address the changing payment trend.

The themes of this project are as follows.

Mr. Kitauji, Deputy General Manager of Card Payment System Department of Japan Research Institute (JRI) Limited, who was in charge of the development and operation of this project, explained the effect of HPE vNS as follows – “As an IT solution expert in the Sumitomo Mitsui Financial Group, JRI has been involved in the development and operation of core business systems of Sumitomo Mitsui Card and other group companies for many years.

HPE vNS, which provides a fault-tolerant system with a software stack, has many benefits for us. The separation of hardware and software solves the problems of different life cycles. If a vNS on x86 servers can be housed in a standard rack, it will be possible to provide a fault-tolerant services on the common infrastructure system of Sumitomo Mitsui Card. Furthermore, the SNA protocol used for back-end host communication was able to be replaced with REST API and JSON. In the future, there is a possibility that NonStop systems can be linked with various systems inside and outside the company via REST API. ” 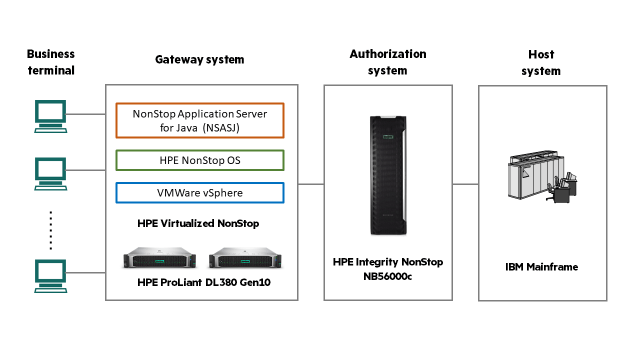 Prior to the launch of this project, SMCC and JRI participated in Technology bootcamp and had discussions with the HPE NonStop development team, and felt a positive response to vNS. Mr. Okonogi, Deputy General Manager of Card Payment System Department of JRI explains as follows.

Finally, Mr. Kitauji of JRI talks about his expectations for the HPE NonStop server as follows.

“Operating a gateway system with HPE vNS had the important objective of determining the effectiveness of HPE vNS in a mission-critical production system. If we can achieve the expected performance without system outages 24 hours x 365 days, we will be able to further expand the scope of HPE vNS. We hope that HPE and HPE NonStop servers will continue to support our mission. ”