This is the second part of “Future of Money”. The first part was published in the previous issue, where we covered topics regarding the definition of money and its position vs. currency. We also discussed the emergence of crypto and stable currencies, their relevance, and how they’ve established themselves within our societies worldwide.

Following on the same theme, here we draw our focus to the global governmental monetary policies to date and where it has taken us. We will dive deeper into how cryptocurrencies have evolved and why crypto commerce is poised to take a massive step forward. Most importantly, we will demonstrate how a NonStop platform can enable you to turn this into an opportunity for your company at low cost and risk.

In parallel, we are publishing another article in this issue that shares a customer success story from a major Bank in Saudi Arabia and their expansion from HPE NonStop to Neoleap™. 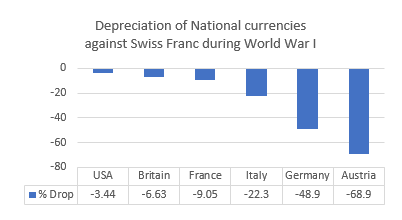 Beginning in the mid-19th century, most economies in Europe had backed their currencies using gold reserves. Referred to as The Gilded Age, this era brought about a period of economic stability and created a segway unto unprecedented growth

in innovation – unmatched throughout history up until the creation of the internet.

This all changed as World War I went underway. Aside from the Swiss, other governments issued unbacked currencies to finance their war efforts, which slowly brought about a devaluation of their currencies as compared to the Swiss Franc. Due to its geographical distance and late entry into the war, the USA and its currency were the least affected.

This lax monetary policy did not stop after the war; rather, it accelerated. Governments continued to issue unbacked currencies to finance their internal growth, meet demands during World War II, and quite often, just for short-term pure political objectives. The snapshot below demonstrates the depreciation of the US Dollar against gold and the events that triggered it. 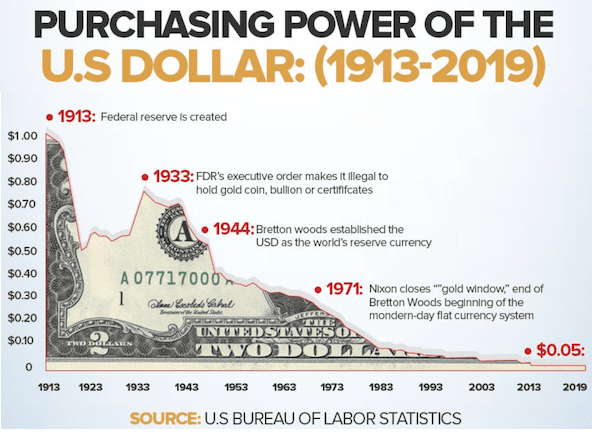 In short, from 2013 through 2019, the US Dollar had lost over 95% of its valuation vs. Gold – all before COVID-19, when Trillions of additional USD flooded the market.

This, however, is not unique to the United States, as many other countries followed similar policies. Shortly after World War II, the USD was selected as the World Currency. All other European countries brought over their gold reserves to the US and were compensated at $35 USD per ounce of coin. A promise was made to each country stating it could claim its gold at any time and at the same $35 price. However, this changed on August 5, 1971, when President Nixon negated the promise (Gold is valued at nearly $2,000 USD per ounce today). The chart above shows the effects these policies had on currency devaluation. Keynesian economics, advocating for governmental control of the money supply, attempts at managing commodities supply and demand, and price control has proven detrimental to the countries that adopted it.

So, what’s so special about gold, and what can replace it in the new digital world?

Gold has little industrial value, but it is a rare and stable metal with very limited supply. Most of the available gold is already mined and above ground. Despite advances in technology, it is becoming exceedingly more expensive to mine the remaining gold. Worldwide, gold is accepted as a store of value and is passed from one generation to another. Governments continue to add to their gold reserves (and sell at times to negatively affect its price), with the USA possessing the largest reserve at 8,000 tons, whereas China (currently ranked 6th worldwide and with a reserve of 2,000 tons) is aggressively increasing its holding by an average of 400 tons annually. This represents a testament to the recognition of the value of gold by global economies and the International Monetary Fund (IMF), itself holding 3,000 tons.

At the height of the global recession in 2008, an unknown individual known by the pseudo name Satoshi Nakamoto issued the White Paper on Bitcoin which set the basis for decentralized global digital commerce. Notwithstanding its historical rise in price, the fundamental strength of Bitcoin remains true for the following reasons:

One important note: CBDCs are and will continue to be a digital representation of a government’s currency. It will have the same values as its twin paper currency. As such, governments may continue to freely flood the market with more CBDCs, while Bitcoin supply remains fixed and available to use for commerce by global denizens.

There is only one remaining hurdle and that’s something we all know quite well: Transaction Per Second (TPS) and Cost per Transaction. This, too, is about to be overcome. New “Proof of Stake” algorithms are about to cut the transaction cost to a fraction of what it is today. Throughput is expected to reach over 100,000 TPS, far more than any other digital throughput available today.

Ethereum 2.0, Solana, and Cardano, as well as several others, all use a variation of “Proof of Stake” or “timestamp” logic. Let’s get a bit technical. In the case of Ethereum, there are already over 240,000 Validators (each staking 32 Ethers) around the world. At Idelji, we operate two such validator nodes. Committees of 100 Validators are randomly formed for a period of 24 hours and given blocks of transactions to validate. A block is added to the chain if a majority of the committee members attest to its validity. For its work, each validator receives a small fee (“Gas” paid in Ether). Each Committee is disbanded after 24 hours, and each validator is once again randomly assigned to one of the thousands of other newly formed Committees. This is what allows for low latency and cost within a secure global and decentralized network.

Such transactions may include the transfer of coin in the host (e.g., Ether) coin or any other. For instance, it may be used as a wrapper for the transfer of a Bitcoin Satoshi, or a fraction thereof, from one party to another. In short, this allows for the near-instantaneous transfer of any valid cryptocurrency or CBDC to settle a transaction anywhere around the world at a very low cost.

Although the majority of HPE NonStop users are financial institutions, Crypto Commerce affects all businesses, as they are in existence to receive value for their goods and/or services. Here we’ll explore how rather than being an obstacle to evolution, this is an advantage that can help speed up the process by:

Banking: Traditional to Digital to Neo

Banks previously used to compete to open branches at prime locations in nearly every town and city. As customers, we used to visit these branches to open a new account, make deposits, withdraw cash, or apply for a new loan. With the advent of ATMs, came the ability to do deposits and withdrawals right outside the bank or at other public locations. Furthermore, online banking, be it via a website or a phone app, reduced our reliance on ATMs. Our daily commerce requires less cash than ever before, as it is mostly handled via credit cards, Square, Apple Pay, or the like. For most of us, there is hardly ever a need to visit our Bank branches. Banks too noticed this trend and started reducing their staff count and closing branches. This accelerated during the Covid period when digital banking became our only option.

At about the same time, a new trend emerged: Neo Banks, licensed financial institutions that started without having any branches. Neo Banks searched for new customers online and at certain events, such as when individuals signed a new lease, bought a house, started a new business, or opened a new gaming or metaverse account. This is how the new generation is being introduced to banking, using a medium they are already comfortable with (cell phones, gaming platforms, a metaverse city they visit and “reside” in, etc.).

Google and check backgrounds of bunq™ in the Netherlands, Starling™ in England, Sofi™ in the US, and NuBank™ in Brazil. All are startups and less than 10 years old. In fact, in the history of the world, Bunq™ holds the record for the least amount of time required for a startup to reach Unicorn status ($1B valuation). This was a global wake-up call to all traditional banks. Growth of new customers and accounts took a reverse direction in brick-and-mortar banks while showing accelerating growth with Neo Banks.

What’s more, in addition to basic banking services, Neo Banks quickly enhanced their services to include insurance, ETF investments (created and managed in-house), direct credit card offerings, and Crypto Commerce (check the products page of Sofi). All is being done, either free of fees or at far lower costs as compared to legacy banks. This occurred simply because of automation from day one and lower overall cost of operation (no branches, far lower staff).

Most banks still do not have an answer to this phenomenon. The larger the ship, the harder it is to change direction. Current staff – banking or technical – often lack the desire or knowledge to switch to Neo format. On the other hand, newer talents who are comfortable with Neo Banking know very little about traditional banking and established methods. Here lies both a major concern and a great opportunity.

Nearly all NonStop users involved with Payment processing use one of three Apps: Base 24, Connex, and Lusis. These solutions reliably process transactions on the most reliable platform we all know and love: HPE NonStop.

Customer profiles, Account histories, network lines inside and out, as well as links to local ACH (or the like) and global SWIFT is already in place. This is a major asset, which simply needs to be realized. You do not part with a solution that has been working reliably for decades; you bank on it and grow.

Nothing has, nor will it ever change how a transaction is processed: one account is debited while another receives a credit. What is changing is:

We have an opportunity to build on top of our current payment systems and rapidly create new features on Neo banking.

As with most other undertakings:

In most cases, you can go live with your initial offerings in a few weeks and grow your portfolio in the months ahead. It is doable.

HPE NonStop devotee for decades, we have opened its architecture to Neo banking and Crypto commerce / Blockchain.

Leading a team of mostly Millennials at Idelji, we are bringing heavy AI to NonStop to open the path for new solutions Gen Zs will need in a decentralized universe.

David Lorenz is an HPE NonStop sales specialist from Tampa Florida with over 25 years of direct sales to the finance, telecommunications, DoD, and retail industries.

David has been the HPE representative at NACHA ( US ACH association) and the NACHA payments alliance as well as the PayIT conclave in Mumbai.

He sees tremendous opportunity to evolve and expand the NonStop operating environment beyond the card networks and into the rapidly evolving mobile financial marketplace.

Working closely with customers in the telecommunications and financial services industry over his career gives David a very unique perspective on their convergence.

dlo has a keen interest in monetary history and the geopolitical and social events that are driving the rapid evolution that is happening in payments today.