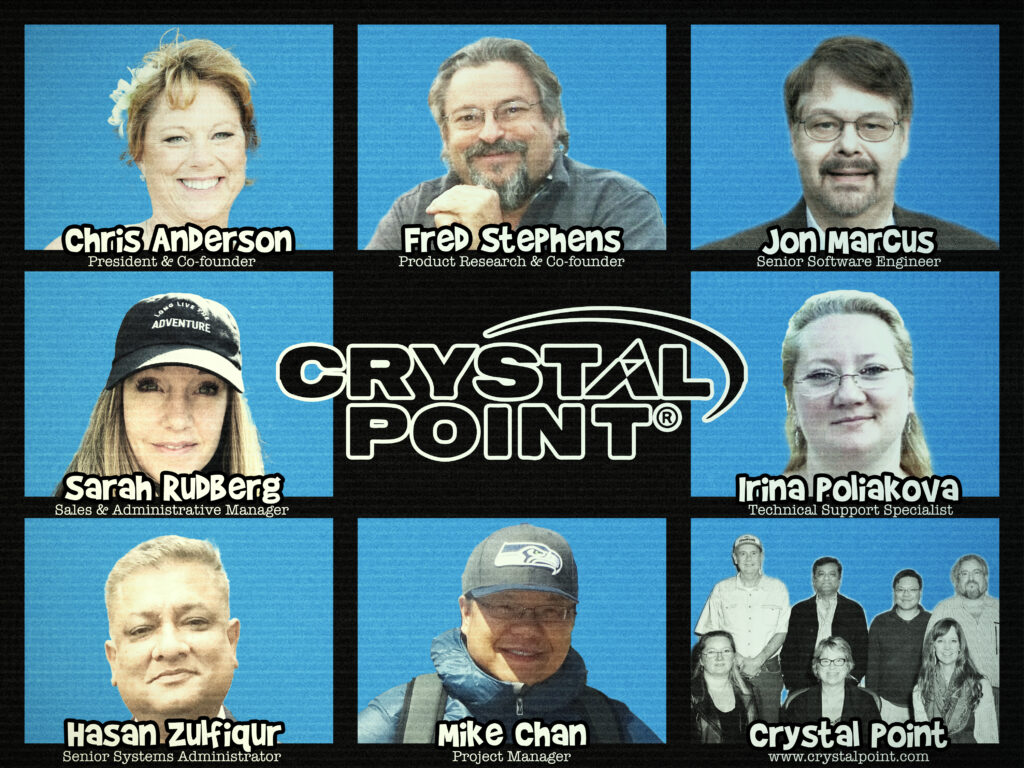 It All Began in a Hot Tub

Every company has an origin story, and company names aren’t always created from the obvious. Steve Jobs branded his company Apple Computer after he returned home from working in an apple orchard.  Jeff Bezos wanted his tiny business to grow as big as the Amazon River, the largest in the world. Google was supposed to be named Googol, a math term for ten to the one-hundredth power.  But when the name was misspelled as Google during a domain name search, the decision was made to register the mistake.

Then there is Crystal Point.  Co-founders Chris Anderson and Fred Stephens had just purchased from Blue Sky Enterprises the terminal emulator software Fred had created as a Blue Sky employee.  Like so many tech startups in the 1980s, money for Chris and Fred was very tight.  Mortgage interest rates were high back then, and foreclosure was a real possibility.  Thus, a $150,000 acquisition meant $150,000 in debt, which meant quickly finding new revenue streams, which meant building their own company, which needed a name before they could incorporate.

Here’s where the hot tub comes in.  Chris, Fred, and others were celebrating the new business by drinking champagne out of crystal glasses while soaking in a hot tub.  As they bandied about possible company names, one of their tub mates looked at his glass, lifted it high, and pronounced the new name to be Crystal Point.  How many bottles of champagne had been consumed before this declaration was made remains shrouded in the past.  But the name stuck.  Crystal Point Inc.

Every company has an origin story. 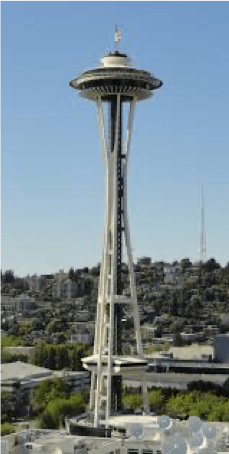 Crystal Point Was Incorporated in 1986

Crystal Point is a home-grown company, established in 1986 in the suburbs of Seattle, Washington (USA). Unlike Apple, Microsoft, Amazon, Google, and Hewlett-Packard, all of whom began business in garages, Crystal Point co-founders Chris Anderson and Fred Stephens set up shop in one of their bedrooms, only a short drive from Seattle’s famous Space Needle.

Prior to their leap into company ownership, Chris worked for a firm that created mainframe software for power utility companies.  Fred was employed by Blue Sky Enterprises, which owned a dozen or so Computerland franchises.  Computerland was a widespread chain of retail computer stores that thrived during the early years of microcomputer sales. It was among the first chains to introduce the IBM PC in 1981.

One Computerland customer was Pierce County Blue Cross. They used NCR mainframes with NCR dumb terminals, which were capable of only 10 to 12 commands.  The terminals took up all the space on the desks of Pierce County employees.  That made it difficult for Computerland to sell what as Fred laughingly puts it, “those newfangled PCs.”

To resolve the terminal/PC desk space conflict, Fred created an NCR terminal emulator on IBM PCs. At the time, no high-level languages other than Basic existed for the IBMs.  In fact, PC software in general was scarce.  So Fred coded his NCR emulator in Assembly.  Another Computerland customer asked for a DEC emulator.  Yet another ordered an ADM-3 emulator.  All were created by Fred.  By the time he left Blue Sky to establish Crystal Point, fourteen Fred Stephens emulators had been private-labeled by Computerland.  Fred was an emulator specialist.

A Computerland store not owned by Blue Sky Enterprises heard about Fred’s emulator software and sold it into what was then the Hanford Nuclear Reservation, a now-decommissioned Washington state nuclear complex run by the United States government.  Ungermann Bass (UB), a large enterprise networking company in the 80s/90s, attempted to sell its own terminal emulator into Hanford and was roundly rejected.  Instead, Hanford suggested that UB ask Fred to integrate his emulation software into the Ungermann Bass network.  The installation was so successful and rapidly performed that UB immediately approached Blue Sky Enterprises to distribute it.

When Fred left Blue Sky not long afterward, Ungermann Bass informed Blue Sky that they would continue to use the emulator solutions only if Fred were involved. That’s how Chris and Fred wound up as software owners, with $150,000 worth of debt paid overtime in royalties, with a company formed in a hot tub, and with Ungermann Bass as a customer/distributor.

From its inception in the 1980s to its position today as an HPE Silver Partner, Crystal Point has provided host connectivity software from PCs to a broad selection of mainframe computers over numerous networks.  Although the company now focuses on NonStop emulation development, it also provides SSL- and SSH-protected solutions for IBM and UNIX.

PC Magazine once declared terminal emulation to be dead.  Yet Crystal Point stuck with the technology because it’s what they did best. The co-founders had faith, so they continued to produce new emulation products and to add features to existing solutions.

It was tough going at times.  Back then, there were no lawyers, bankers, or accountants who understood the value of a software company.  Hard assets could be used as collateral, not code.  Banks were reluctant to lend.  Fred, the technical whiz, wasn’t administrative-oriented.  Therefore, Chris, who wasn’t technical, assumed the role of business and marketing executive.   She was the one who evangelized software as a reliable asset. She was the one who cajoled bankers into giving Crystal Point a chance. Gradually, her efforts were rewarded.  She and Fred expanded the company and finally were able to finance a move into a real office.

Explains Jon Marcus, now a senior software engineer for Crystal Point after years of working with NonStop systems via Tandem Computers and HP, “Crystal Point has a tenacity that I have never seen before. Their approach to the business of terminal emulation is relentless.” 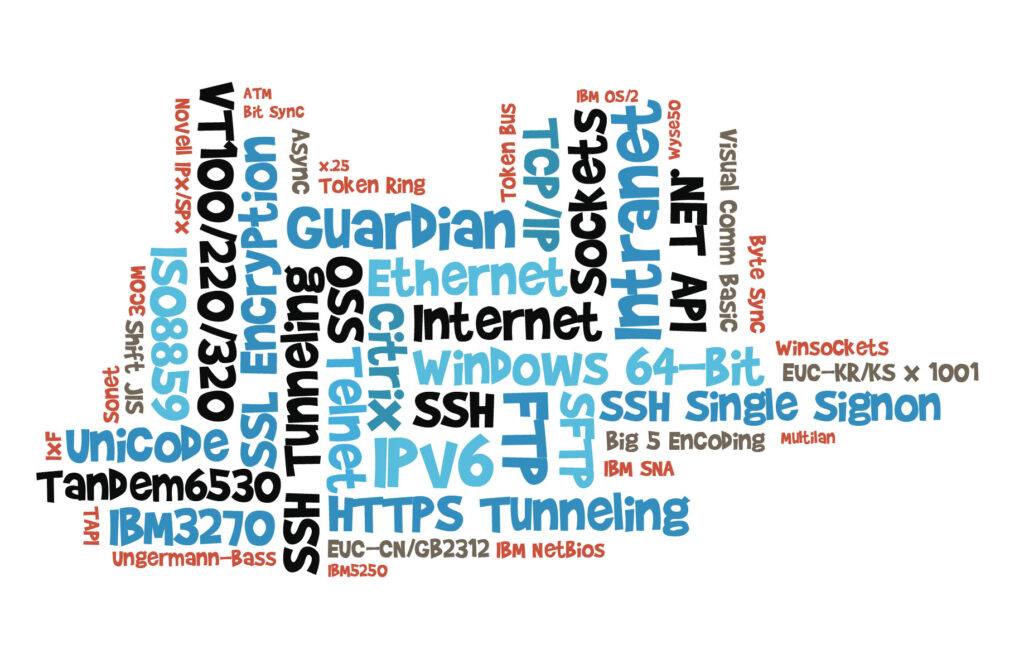 The word cloud in this article provides some insight into the myriad technologies in which Crystal Point became involved over the decades. So many host platforms, physical interfaces, and networks. So many standard environments. So many competing products for data communication and network protocols.  Early on, everything was proprietary. Nothing interoperated.  Now everything is open.

Even when Crystal Point decided to concentrate on NonStop technology, the changes within the industry were rapid. OS/2 as a potential standard environment for corporate desktops was replaced by Windows 2000.  TCP/IP overcame XNS, SNA, OSI and others to become the standard communication protocol on Microsoft-based networks.

For Crystal Point to succeed, its solutions had to adapt via regular upgrades, new features, even new products.  According to Chris, the company’s salvation was Fred.  He lived terminal emulation, programmed in his sleep, debugged in his sleep.  He read and researched extensively, especially about the broader implications to Crystal Point of changes to the enterprise.  Rarely was Fred caught by surprise, and this enabled the company’s products to remain viable and modern.

Crystal Point concentrates on user usability in a specific market niche – the desktop terminal emulator for the NonStop workspace.  They are the original provider of PC host connectivity software for HPE NonStop systems. The company also created TTE, the original Tandem Terminal Emulator, which evolved into what is now sold as the popular OutsideView, Crystal Point’s flagship product.

According to Chris, among the multiple emulations the company has developed for NonStop are those for DOS, OS/2, and all the Windows releases.

AppViewXS™ – Publish modern, fully integrated host applications over the web.  AppViewXS offers reliable, secure access to host applications, thereby creating a seamless information flow throughout an enterprise. It enables the conversion of host-based data into web formats without the need for any real programming.

OutsideViewWEB™ – this Crystal Point product offers access to legacy host green screens via browsers over the web.  Users can centralize software management at the server, reduce software ownership costs, and easily extend host access to a broader audience.  Single-host or multi-host, legacy applications can be up on the web and fully secure within minutes.

Ungermann-Bass was an early Crystal Point customer/distributor/sales channel. Within their networking solutions was embedded Crystal Point software. In Tandem Computers, which purchased UB in 1988, Crystal Point found yet another distributor.  Crystal Point’s first Tandem customer was GTE, which needed NonStop terminal emulation over an Ungermann Bass network.  For this client was written the first Tandem emulator, developed for the 6530 terminal under the OS/2 environment.  After an extensive development phase, Tandem private-labeled the OS/2 6530 emulator along with a Microsoft Windows 6530 emulator as TTE (Tandem Terminal Emulator).

From that experience, Chris and Fred determined that a nice Tandem base market existed for them. As such, Fred continued to develop multiple Tandem emulations; and Chris focused all her business planning efforts on the platform.

Today, you’ll find Crystal Point at the major NonStop conferences.  Although competitors do exist, Crystal Point is the only vendor who specializes exclusively in HPE NonStop terminal emulation.

A Passionate Approach to Customer Service

It’s not just the technology. In order to remain viable in an ever-changing IT landscape, businesses must focus on customer satisfaction. To this end, Crystal Point performs customer service better than most. They are passionate about their clients, many of whom tend to be quite risk-adverse and are inclined to remain with the vendors they know. It helps a great deal that the Crystal Point staff who work directly with customers have been with the company for years.  A user who contacts Crystal Point for assistance is able to talk to sales and support staff on a familiar, first-name basis. Because Fred and Chris have always prioritized communication, issue resolution is swift. Every customer, no matter the product or release version, receives the same exceptional support.

As for the future, Crystal Point is in the middle of completing a new customer survey.  An analysis of the responses will help the company set their forward direction. According to Fred, recommendations made by customers during site visits often drive new product features and upgrades. Fred offered the example of a user who grabbed him as he was leaving a customer site.  The user told Fred that in Outside View, he wanted to see more lines of text on his display and to be able to resize text as it moved from one screen to another.  That brief comment led to the dynamic line feature available in OutsideView 9.0 and earlier releases.

Born in a hot tub, shunned by lenders clueless to the value of exquisite code, Crystal Point nonetheless expanded its product line, thrived financially, and is recognized by peers and customers as a leading terminal emulation software provider. Although educated in a background of numerous hardware platforms, network interfaces, standard protocols, and security regulations, Crystal Point now focuses its development efforts for the HPE NonStop platform.  Chris Anderson and Fred Stephens remain with the company they co-founded, still devoted after thirty-four years to their contribution to the science of computing. 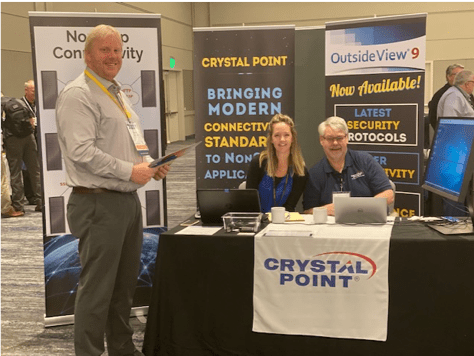 Since 1986, Crystal Point has delivered efficient, cost-effective HPE NonStop host connectivity software solutions. Our flagship products – OutsideView, AppViewXS, and OutsideViewWeb – are secure, reliable, and modern. We best serve our worldwide customer base by remaining abreast of the latest computer trends and technology advancements and by incorporating these new capabilities into our solutions.  As a result, our customers benefit from the finest host connectivity tools available. While Crystal Point continues to attract the loyalty of new NonStop users, our reputation has been cemented by our passion for delivering exceptional support to all Crystal Point customers, no matter the product or release version.  After all, the needs of some customers just don’t change. For more information, contact Sarah Rudberg at +1 425-806-1125. Visit us at www.crystalpoint.com.