We’ve had a busy year here at NuWave, and as of this writing, NonStop TBC hasn’t even happened yet! This year was NuWave’s 20th anniversary, as you may have read about in the July/August issue of The Connection, and it was also the 15th anniversary of our partnership with TIC Software, NuWave’s primary reseller in the United States and Canada. This year, we’ve also been doing a lot of traveling to meet all of you lovely NonStoppers and to spread the word about Web services!

As usual, we kicked off our 2019 conferences with SunTUG in Tampa, Florida on March 1st. Since NuWave’s founder, Ernie Guerrera, resides in the Tampa area, he was excited to see some old friends and talk modernization with the local NonStop group. TIC also presented on future-proofing NonStop using NuWave’s LightWave products.

In April, we headed to NYTUG–an event that I had organized in years prior, and Peter Schvarcz did a great job with this year. Ken Goldman, HPE Director of NonStop Sales for North America, delivered the great news that there has been a significant increase in NonStop sales in 2018, due partly to some new customers in the US and abroad. I co-presented with Phil Ly from TIC, where I talked about some new and exciting customer use cases, showcasing the ways in which our customers add value to their NonStop applications, and Phil presented on how customers are using LightWave ServerTM to eliminate greenscreens and LightWave ClientTM to access cloud services.

In early May, we travelled to one of the rotating shows, LATUG (Latin America Tandem User Group), which was an excellent event and was held at the historic Hotel Tequendama in Bogota, Colombia this year. There was a high level of customer engagement at this event, with multiple customer presentations, including the keynote session, which was given by Gina Pardo from Assendared. There was a wonderful welcome party on the first night, which included drinks (of course), appetizers, and a very entertaining traditional Colombian dance performance. We presented (with a translator) on the variety of ways to securely access NonStop applications, and we enjoyed meeting with the local NonStop users, as well as our Colombian reseller, PTESA. I also enjoyed a local dinner with the other NonStop partners in attendance: 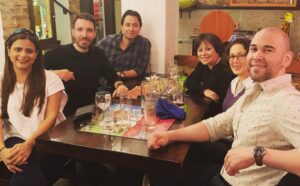 The biggest spring event for the NonStop userbase was probably the pan-European conference, this year having been rebranded as ETBC (European Technical Boot Camp), formerly known as eBITUG when hosted by BITUG or eGTUG when hosted by GTUG. This May, we headed to beautiful Edinburgh, Scotland for a couple of days of presentations, meetings…and we also indulged in some whisky tasting, a team building hike up to Arthur’s Seat, a hop-on hop-off bus tour, and a visit to Edinburgh Castle. The weather was absolutely gorgeous, with myself and the other Under 40s enjoying some fresh air and sunshine during our networking event, and Daniel Craig from TCM telling us how rare the nice weather was, which explained why there were so many Scotsmen out sunbathing during our trip.

HPE’s presence was high at ETBC, with informative presentations from Neil Davis, Franz Koenig, Mark Pollans, and the new director of NonStop Engineering, Teresa Sorg. We presented on our solution for integrating existing HPE NonStop applications with R3 Corda–something NonStop users have been very excited about–and had our live demo available at the booth to share with attendees.

The keynote presentation was unique and interesting, as the theme was finding meaning in your work. It was presented by Justin Wren, a.k.a The Big Pygmy, a professional MMA fighter and founder of the organization Fight for the Forgotten. (I later found his book on my bookshelf at home–small world!) He talked about his work in Africa helping forgotten Pygmy tribes rebuild their villages by installing clean water solutions and advocating for their right to safety and the freedom to provide food for their families. We had a chance to talk with Andrew’s long-haired doppelganger during the “Taste of Scotland Gala Dinner”, organized by BITUG: 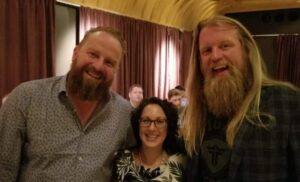 The dinner function also included bagpipe music, excellent wine, and of course, the traditional Scottish dish haggis! We even got to hear Robert Burns’ poem “Address to a Haggis”–which we didn’t understand a word of but found very entertaining–acted out with the haggis before we ate it!

The always wonderful North Texas Tandem User Group (N2TUG) show was held on June 27th at the sprawling Gaylord Texan Resort in Grapevine, Texas. As usual, the event was extremely well-attended, showing the positive state of NonStop usage in Texas. Meg Watson, Master Engineer at the NonStop ATC, presented on DevOps, which was the theme of the conference. HPE’s Justin Simonds presented on the history of artificial intelligence, and NuWave and TIC co-presented on how HPE NonStop customers can gain a competitive advantage using NuWave’s LightWave solutions. 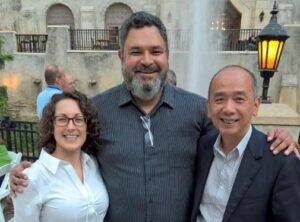 July saw us heading to Asia for a busy week of conferences and meetings in Korea and Taiwan. First, we went to Seoul for the HPE NonStop Innovation Summit. Monday was partner day, which allowed us to spend some time with HPE and our partners in Korea, including ezTips, NuWave’s Korean reseller. 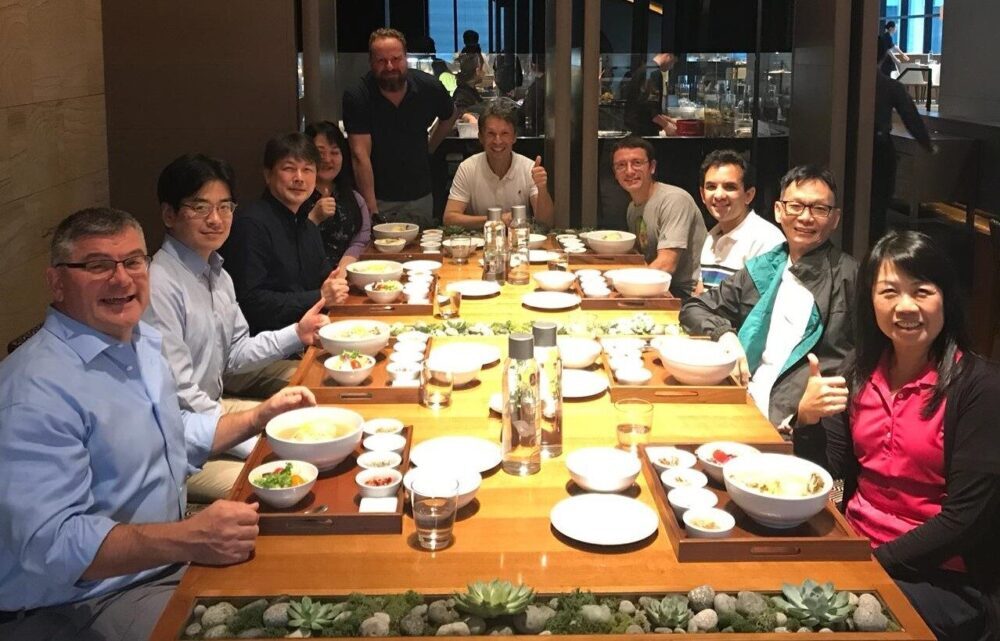 HPE Partners Enjoying a Meal at the Partner Summit

Tuesday’s customer event in Seoul was a delight. We haven’t been going to this event for very long, but we’re getting used to HPE and the local marketing team putting together a consistently great show. HPE provided some excellent speakers, with Franz Koenig, Head of the HPE Worldwide Advanced Technology Center (ATC), starting off with an update of HPE IT’s internal usage of NonStop. It was great to see HPE getting extensive use out of their own NonStop gear! Gelin Cheng from HPE Singapore then gave an update on HPE’s APAC business, with the news that things are going very well in that part of the world. Franz then went back up to discuss modern NonStop architecture and methods, a really interesting view into some of the new things HPE has been working on. 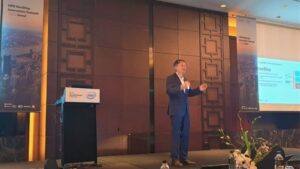 We were also lucky enough to have Shinichiro Matsumoto (above) presenting at both the Korea and Taiwan events. Matsumoto-san, from KDDI, gave an extremely informative presentation on how HPE NonStop compares to Linux and Oracle when it comes to Java applications. NuWave of course presented on REST-enabling NonStop applications, including NET24, which is widely used in Korea. Then Young-Jin Cho from ezTips presented on how LightWave products can help to open the NonStop up to new REST-based business models. 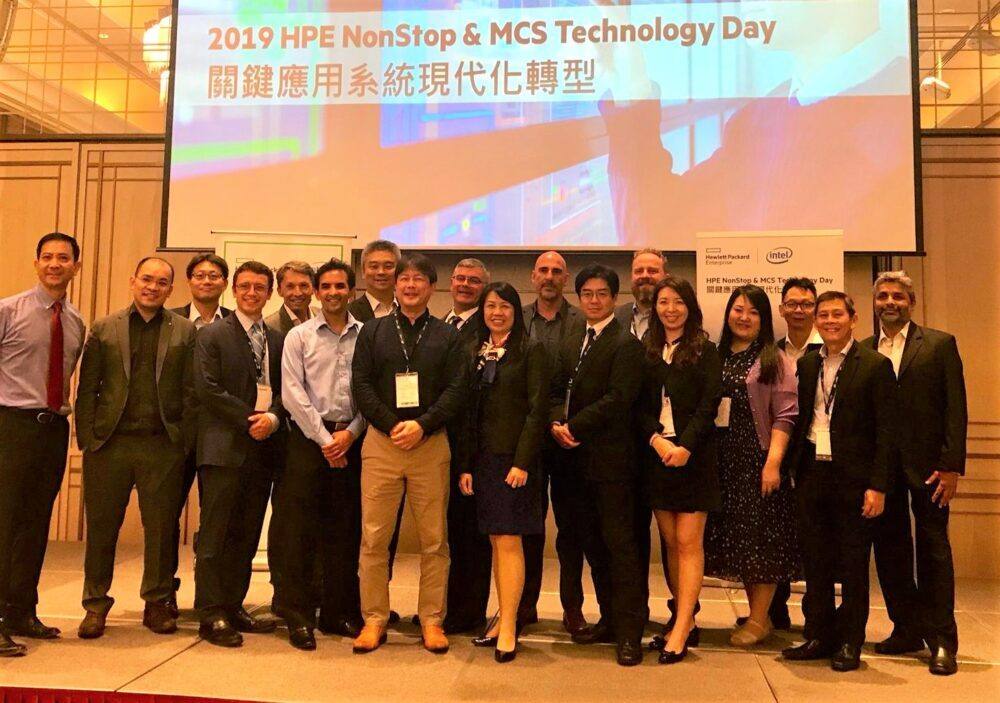 HPE and Partners Gather at the End of the Taipei Conference

Later that week, we were doing it all over again in Taipei, Taiwan, with a partner day at the HPE Taiwan offices. We spent time with all the local partners, including Syscom, NuWave’s distributor in Taiwan. Friday was the customer event, this time held at the spectacular Grand Mayfull Hotel in Taipei. We saw similar presentations from the HPE folks, and once again we presented on REST-enabling NonStop applications, to a full room.

The recently rejuvenated Australian NonStop User Group (OZTUG) conference took place in early September, and NuWave’s Andrew Price (also the OZTUG Chair) was on-hand to answer all of the users’ NonStop modernization questions. HPE, OZTUG and the vendors were excited to present at the HPE NonStop Technology Summit/OZTUG conference this year. This event has struggled a little in the past, but with excellent funding from Intel and other vendors, and with logistical support from HPE and OZTUG, the event has rebounded in the last few years, with great turnouts in both Sydney and Melbourne. Each location has a full-day conference and uses the same agenda, attracting attendees from Sydney and Melbourne-based customers, but also from customers in Western Australia, Queensland, and even New Zealand!

This year, the Sydney event was held at the spectacular Intercontinental Hotel. Located at Circular Quay, with the right room (or from the pool), you can enjoy views like this: 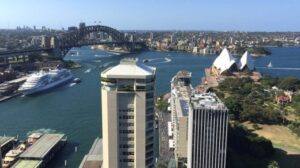 Suresh Menon, HPE GM of Mission Critical Solutions in APJ, gave the first presentation of the day, which was a NonStop technology update. We were also lucky enough to have Prashanth Kamath, Senior Worldwide NonStop Product Manager, join us from Bangalore. He actually gave three presentations: a TS/MP update, a NonStop software update, and a presentation on NonStop virtualization. David Gillbanks from HPE Australia gave a very informative presentation on KDDI’s POC of NonStop Java and SQL/MX compared to Linux and Oracle. After the event, everyone was ready for a drink, and we enjoyed a cocktail hour at the same venue.

The venue for the Melbourne conference was the Park Hyatt Hotel. No harbor views, but a stunning location.

The Melbourne event followed much the same agenda, with Andrew Price giving a LightWave product update at both locations. His presentation generated some good discussion about how to integrate with internal API gateways, which are becoming more and more prevalent with NonStop users.

Overall, we’ve had a great year so far and can’t wait to cap it all off with NonStop TBC19 in San Francisco!