A major U.S. merchant provider operates a major payments transaction authorization switch – to several million small to medium-size businesses throughout the world. The merchant processes payment authorization for Visa, MasterCard, American Express, Discover, Diners Club, and other major credit and debit card client companies. The cards are issued by banks and other financial institutions for consumer purchasing at brick-and-mortar and online stores, and for withdrawing cash from ATMs. Each card transaction must be approved by the issuing bank before it can be accepted by a merchant or an ATM.

In a simple overview, the merchant’s payment authorization process begins when a consumer’s credit card is presented for payment. An authorization switch receives the transaction and analyzes it, determines which bank is servicing the credit or debit card, and then sends the transaction to that bank. The bank checks to ensure that the card was not flagged as lost or stolen and that the vendor and the amounts on the transaction are not suspicious. If the bank responds positively, and if the switch detects no other problems, an affirmative authorization message is returned to the originating device or system, and the transaction commits. Otherwise, the transaction is aborted.

The merchant’s payment authorization services are extremely critical to its client companies and especially their end users. If any of these services becomes unavailable, then shoppers all over the world are not able to use their credit or debit cards. Therefore, to guarantee that its authorization services are always available, the company diligently implemented business continuity solutions using real-time data replication technology.

The merchant’s business grew and was operating two datacenters, Datacenter North and Datacenter South, which were located 1,000 miles apart on the East Coast of the U.S. The transaction authorization switch functions are duplicated in each datacenter, and processing workload is split between the two sites.

The merchant runs its certified management account (CMA) systems on HPE NonStop servers which maintain a database of all cards issued by participating banks. Banks send batch files to the CMA system for new cards they issue, cards they report as stolen or lost, and other card status changes. These batches are received by the Datacenter North CMA system and stored in its card database.

The merchant’s distributed CMA system needed to be synchronized. It also needed to replace its legacy Disaster Recovery (DR) plan for a solution that would provide a much faster recovery time. The merchant performed extensive research and evaluations, and discovered that data replication was the best long-term solution.

When Datacenter North receives its batch changes, they are replicated to Datacenter South by the HPE Shadowbase data replication engine. Therefore, both CMA systems always possess the complete and up-to-date data of all the cards that were issued. This architecture provides continuous processing services even beyond a disaster that destroys one of the datacenters or causes a failure of one of the systems. If one system fails, then all batch updates from the issuing banks are routed to the other CMA system, which is responsible for keeping the nodes updated at both sites.

This architecture also allows for rolling upgrades to be made to the CMA systems. One system can be taken down and its operating system, application, database, or hardware upgraded while the other system carries the CMA load. The first system can then be returned to service and, likewise, the second system taken down for an upgrade.

After several years of successfully operating in its DR architecture, the merchant upgraded to an active/active architecture. A copy of the configuration database is maintained on each node for local access. These copies are kept synchronized with the Shadowbase bi-directional data replication engine; any change made to a copy of the configuration database on any node is immediately replicated and made available to all other nodes.

As shown in Figure 1, the nodes are partitioned by card numbers. Each card is assigned one node, which avoids the potential problem of data collisions arising from card updates. All transactions for a card are routed to a single node; the node makes transactional updates to its database, and Shadowbase software replicates the changes to the other database copies in the network. Since no two nodes are making simultaneous changes to a card, data collisions are avoided.

The company converted its independent, four-node switch to an active/active configuration, which can almost instantly recover from any fault in the system, including a total node failure, with a recovery that is transparent to client company’s end users.

A major function of payment authorization is to detect the fraudulent use of cards. If a transaction looks suspicious – for instance, a new transaction occurs in London while the previous transaction an hour earlier occurred in Boston – it may be rejected.

The merchant faced the difficult and costly problem of detecting and stopping fraud. It would be too difficult to develop and implement a home-grown solution on the application, and taking the application offline was not an option. Each transaction received by the authorization switch needs to be incorporated into a fraud detection system that maintains a log of recent card transactions and compares them with other transactions for suspicious use on the same card. 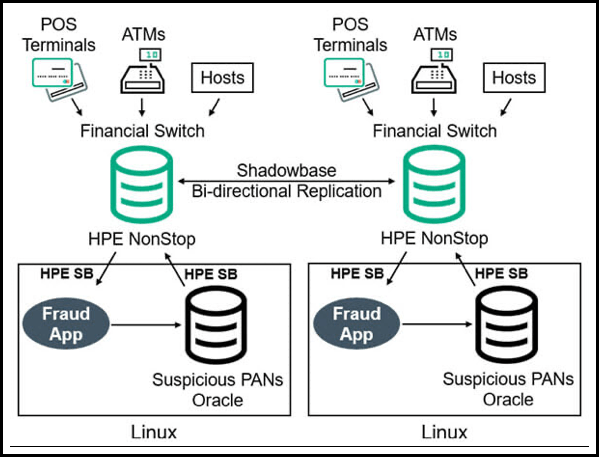 This merchant provider carefully expanded its use of data replication and integration software over the years to add new capabilities and features to its financial switch. First, the company used data replication to provide an active/passive business continuity solution for its CMA system. Second, the company expanded its use of the technology to provide continuous availability for its multi-node switch, via an active/active business continuity solution. Third, to help prevent card fraud, the company used heterogeneous application integration to integrate the switch with a remote heterogeneous application (the fraud detection system). Finally, the company integrated additional data validation and consistency checks to satisfy stakeholders and auditors that the various copies of the data are all in sync. This case study demonstrates some of the many ways HPE Shadowbase data replication software significantly enhances enterprise applications.

[1]The merchant’s architecture actually contains four nodes in an active/active network, but only two are depicted for simplicity.

But how do I know my backup data is consistent? 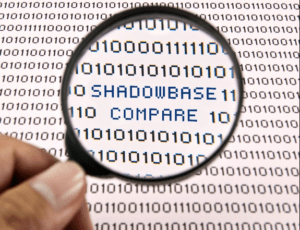 After planning, installation, testing, and creating a working business continuity plan, including the backup systems, network interconnect and databases, the inevitable happens. It is not much use switching to a backup system if its data is not an accurate reflection of the data on the production system (garbage in, garbage out). But how do you know that it is accurate and a consistent copy of the now-lost production database?

Long before the inevitable happens, an integral part of your business continuity plan is to verify that your backup databases accurately reflect your production databases. Periodic and continuing data validation satisfies this requirement, and also plays a vital role in helping satisfy audit and regulatory compliance requirements. As part of performing periodic full failover tests, another check must be made to verify data consistency.

For these reasons, a large European financial institution wished to validate the consistency of its backup database. This institution manages a message switch that generates more than a terabyte of audited data per day, on a database size of about 0.5 terabytes. Additionally, the customer base and subsequently, transaction workload demand is growing.

The institution ran its production and backup comparison processing overnight using a homegrown data comparison script (every row for both databases were “brute-force” compared, and the process took a long time and was very inefficient). As customer growth continued, the overnight window used for the comparison shrank rapidly, forcing the institution to search for alternatives for better throughput and overall efficiency.

Once the entire database is compared in this way, the backup system processes the set-aside blocks. There are several ways these blocks can be handled, but most simple is to just retry the comparison, e.g., sometimes there may be a delay in the application of backup data into the database. Alternatively, the production system sends across the entire block uncompressed, which can then be compared on the corresponding data in the backup system to find the specific row/column inconsistency.

Once the inconsistencies are identified (rows in the production database not in the backup database, rows in the backup database not in the production database, rows in both with columns that do not match, etc.), they can be processed in several ways. One method is to start with a Shadowbase Compare report to detail the inconsistencies found, and then manually resolve them.

More and more frequently, customers use the Shadowbase Repair function provided with Shadowbase Compare. Repair is an out-of-the-box function for resolving data discrepancies. Since the production system is always assumed to be correct, this function typically entails overwriting the data on the backup system, however this frame of reference can be swapped if the customer decides to reverse the repair function.

By switching to Shadowbase Compare, the financial institution dramatically shortened the time required to fully validate its backup, easily completing the comparison within the overnight window with time to spare. An important part of the solution is the usage of multiple parallel comparison operations, each against a distinct subset of the database. The institution is now prepared to failover to its backup system and prove to auditors that their production and backup systems are consistent.

Keith B. Evans works in Shadowbase Product Management. Mr. Evans earned a BSc (Honors) in Combined Sciences from DeMontfort University, England. He began his professional life as a software engineer at IBM UK Laboratories, developing the CICS application server. He then moved to Digital Equipment Corporation as a pre-sales specialist. In 1988, he emigrated to the U.S. and took a position at Amdahl in Silicon Valley as a software architect, working on transaction processing middleware. In 1992, Mr. Evans joined Tandem and was the lead architect for its open TP application server program (NonStop Tuxedo). After the Tandem mergers, he became a Distinguished Technologist with HP NonStop Enterprise Division (NED) and was involved with the continuing development of middleware application infrastructures. In 2006, he moved into a Product Manager position at NED, responsible for middleware and business continuity software. Mr. Evans joined the Shadowbase Products Group in 2012, working to develop the HPE and Gravic partnership, internal processes, marketing communications, and the Shadowbase product roadmap (in response to business and customer requirements).

Mr. Holenstein has direct responsibility for the Gravic, Inc. Shadowbase Products Group and is a Senior Fellow at Gravic Labs, the company’s intellectual property group. He has previously held various positions in technology consulting companies, from software engineer through technical management to business development, beginning his career as a Tandem (HPE NonStop) developer in 1980. His technical areas of expertise include high availability designs and architectures, data replication technologies, heterogeneous application and data integration, and communications and performance analysis. Mr. Holenstein holds many patents in the field of data replication and synchronization, writes extensively on high and continuous availability topics, and co-authored Breaking the Availability Barrier, a three-volume book series. He received a Bachelor of Science degree in computer engineering (BSCE) from Bucknell University, a Masters in Computer Science (MSCS) from Villanova University, and is an HPE Master Accredited Systems Engineer (MASE).